CONFESSION: This summer, I pretty much ate and drank whatever I wanted.

These days, I’m paying for it. While I regret just about nothing about this awesome summer, that frivolity is one thing that pains me. Literally and figuratively. I know…we all get off track, we all give in to indulgences…we all get weird around cookies. But, I seriously used myself this summer. And then I let myself get away with it. I was my own bad boyfriend.

I won’t lie: gluttony is super fun. And it’s easy to talk yourself into. As summer came into focus, I was working out religiously, my health was stable and after all, it was summer. “Can’t we just let go of the rules a little bit?” I thought.

Clearly, I forgot how far I have come.

Let me tell you a story.

In the summer of 2002, I was diagnosed with Crohn’s Disease. By that July, they’d removed six inches of my colon. For about a decade, I successfully managed it with moderate medication and a gluten-free diet. Then, when I had kids, I really started to struggle. My system took a beating through the pregnancies, always up and down with symptoms inside and out, never able to get solid footing in a remission. Out of options, I dove deeper into the research on controlling gut health through diet. At the same time, my doctor handed me more substantial medication. Begrudgingly, in 2013, I started a strict regimen that included both.

And then it happened. This past May, I had a colonoscopy to check my prognosis. After nearly two years of very strict adherence to the Specific Carbohydrate Diet, a boatload of designer medication and earnest attempts at stress management (like quitting my job) — the pictures of my colon showed marked improvement. More than 50% healed and, in some places, completely disease-free! I even got a smiley face on my discharge papers. I was walking on air.

And I walked right into the grocery store and bought a GF freezer pizza, a bucket of GF cookies and and a bottle of wine to celebrate.

If you are unfamiliar, I encourage you to go read about the SCD lifestyle. It’s very similar to Paleo with some exceptions. It means eliminating: all grains (wheat, corn, quinoa, etc.), all sugar (except honey), all alcohol except moderate amounts of approved spirits and red wine, all potatoes, and any dairy products that are not fermented or aged. It’s like “seventh-level” gluten free.

It’s strict, no doubt. But this is how I eat. How I eat to live. And, over the years, I learned to like it. I mean, hey, I lost about 15 pounds and, even if I was little bit naughty and gobbled some Paleo-treats, the scale never budged. Most importantly, I was finally, finally feeling good.

But that cart full of pizza and chocolate chip cookies was a pile of first-degree violations. Grains, dairy, sugar, additives. The next thing I knew, I spent three months giddily sneaking bites of popsicles, ice cream, fries, chips, suspicious dips at parties, corn-on-the-godforsaken-cob, and on and on. And that celebratory bottle of wine soon leaked into the old “bottle of rosé with dinner on the patio just because it’s Thursday” scenario. While all this may not sound so “off the rails” to you in terms of summer indulging — trust me: it was a serious transgression against myself, all my hard work, all that healing.

This is hard to stomach (pun, intended) because I really had a great summer. Practically epic. We traveled a ton, saw so much music, acted like crazy kids and got our fair share of breaks from our children thanks to willing grandparents. It was beyond fun; I felt truly alive for the first time in years.

But, by the middle of August, when I found myself alone in my bathroom, I had to admit: my stomach hurt. I was up nearly seven pounds. My skin was getting fussy again. My hair looked thin and dry. That old neck injury that bogged me down so much last year was alive and kicking. I even stopped exercising it hurt so much. My skinny white jeans were gray with dust. I was having flashes of anxiety so intense I wanted to stop the planet and get off. My sleep became erratic. None of it was nearly as bad as where I was a year ago but when I looked in the mirror, I saw someone a lot closer to that overworked mom than the mindful,  joie de vivre archetype I set out to be.

I figure that I have two choices: I can cower in the corner behind shame and guilt, pretending I don’t know how any of this happened, or I can show up, own what’s going on and take steps to change the future.

So, I hauled myself over to my new functional medicine physician and asked her to start at square one. We quickly agreed that given the recently documented improvement in my colon and the vast array of systemic symptoms, this likely isn’t 100% attributable to Crohn’s. But, my systemic inflammation markers are rearing their heads. I seriously tripped a switch this summer. And we have to connect the dots and squelch the fire before it spreads.

In the coming weeks, I’ll be getting a lot more information. In the meantime, I’m committing to resuming clean eating, exercising (jogging and yoga) and trying to get this pinched nerve in my neck to settle back down.

And, as for Gluttony? 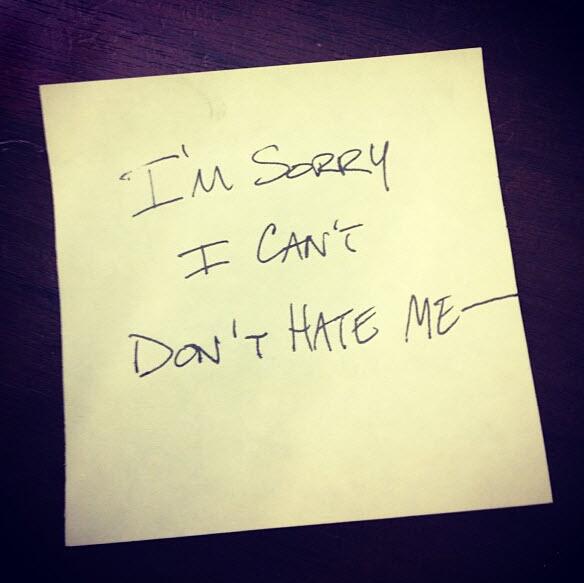 Scenes from a Summer

As a recovering, highly distractable, rage-filled workaholic mom, I'm on a mission to unlock some of the secrets behind what it takes to find real balance and true presence. A mission to wake up. To see the world with eyes wide open. To live with a whole heart and a clear mind. To stop coasting. To start trying. To show up.